Ambassador of India to Nepal

On behalf of Nepal and Nepali people, we are submitting this memorandum letter to you through your Ambassador Shri Manjeev Singh Puri to Nepal to express our strong objection to the new and updated political map of India published by your government on November 2, 2019. In this new and updated political map, we found that a part of far western Nepal consisting of approximately 385 square kilometers land of Kalapni, Lipulekh and Limpiyadhura have been annexed into Indian territory.  Our organization Patriotic Peoples’ Republican Front of Nepal (PPRFN) and its affiliated sister wings strongly condemn this illegal annexation and demand immediate return of our land to Nepal without any conditions.

As you know, historically, Kalapani, Lipulekh and Limpiyadhura belong to Nepal. We firmly claim that they were with Nepal in the past, they are with Nepal at present and they will remain with Nepal for ever. We have many historical evidences, such as Sugauli Treaty of 1816, historical documents preserved in the National Archives of India in London and Population Census of Nepal 1961 to support our claim. We firmly stand on our claim and we do not compromise with India for this land under any circumstances. The annexation of our land into Indian territory on the basis of an unilateral decision of India is a blatant violation of the article 5 of Sugauli Treaty signed by Nepal and British India in 1816. We think that the annexation of our land without any agreements with Nepal is a forceful encroachment and illegal occupation on Nepal’s sovereign territory.  The act of forceful encroachment and illegal occupation of our land by India has severely threatened the sovereignty, territorial integrity and national security of an independent and sovereign country Nepal. In the name of friendship and historical relations, we cannot just wait and watch such an illegal act of Indian occupation of our land and territories.  The new and updated political map has already sparked the protest of Nepali people against Indian government throughout the country and we strongly support their protest.

We firmly believe, you are aware of the fact that we have been protesting against illegal occupation of Kalapani area by Indian Military forces since 1962 and encroachment of India in many parts of Nepal’s border areas to India. The annexation of Kalapani, Lipulekh and Limpiyadhura into Indian territory in a recently published new and updated official map of India has further aggravated our people to protest against the government of our neighbouring country India. This is not good to both countries. As a responsible political organization committed to Nepal and Nepali people, we have been persuading the government of India from time to time to be serious to resolve our long standing border problems. But this has not been happening. In spite of it, once again, we strongly urge upon your Rt. Honourable Prime Minister of India to take the border issues between Nepal and India seriously, return Kalapani, Lipulekh and Limpiyadhura to Nepal and withdraw Indian military forces from Kalapani immediately. We believe that on behalf of government of India, you will now be proactive in this matter.

Thanks a lot for your kind attention. 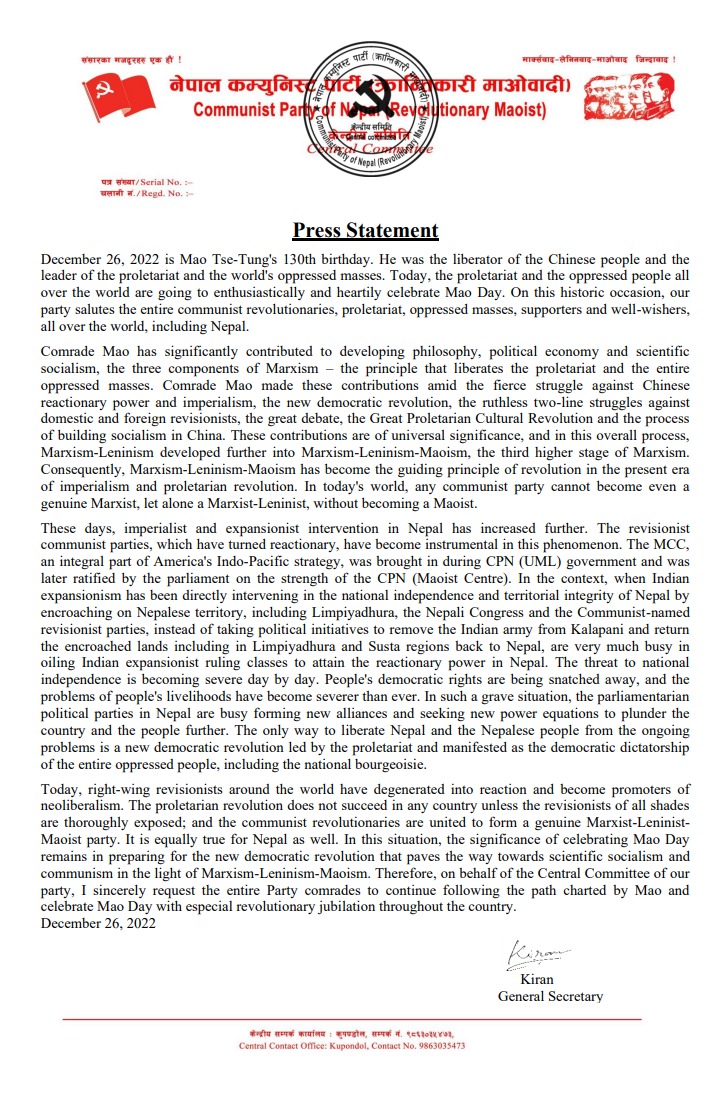